As we recently announced, a few months back, FireForce 3 was invited to race in Iceland as the star attraction to mark the 40th anniversary of the Icelandic Drag Racing Club. The organiser and some of the track crew came over for the FIA Main Event at Santa Pod Raceway and at the track, details of the trip were confirmed. The FireForce team flew out to Iceland late on Monday 1st June and arrived to the wonderful sight of the midnight sun! And yes, it really is daylight ALL day at this time of year!

On Tuesday 2nd June, we headed to the track to wait for the container to be delivered and then the car was unloaded and prepped ready for the Press Day on Wednesday.

The track at Kvartmíluklúbburinn is quite unique in that it has a dip after the 1/4 mile and then a steep incline. When travelling at high speeds, you lose sight of the end of the shutdown area and your perception of the track is lost until you are at the top of the incline. The track has a shorter shutdown area than a lot of tracks and unless you want to end up in a pile of lava rocks and craters, you are best to avoid overshooting!

The Press Day was successful and all the media that attended were intrigued by the car and lots of photos, videos and interviews were taken. The car was pulled into the pit area and a quick start up and demo of the vapour and flame show was enough to impress (deafen and frighten) the media. We even made the Icelandic news that evening on one of the 2 TV channels that they have!!

After the press guys left , we were able to have a bit of R & R time with some of the guys going to the Blue Lagoon! What an amazing experience and a way to unwind before show day!

Thursday 4th June was the main show day and we were told that they expected over 1,200 spectators for the evening’s show which is the largest attended event the track has ever had! I decided to run the 1/8 mile on the first run so I could get a feel for the track and the shutdown area. The first run scheduled at 8pm was a new Personal Best for FF3 over the 1/8 mile at 3.89@215mph! Needless to say, everyone was happy and in high spirits. The Icelandic people were really appreciative of the car and came over to buy merchandise and take photos and speak to the crew.
The second and final run at 10pm closed the show and with an early shut off ran a 1/4 mile time of 6.15 seconds.

Friday 5th June, the car was loaded onto a trailer to make an appearance at a static car show in North East Reykjavik and after the car show closes on Sunday, it’ll be back to the track for another evening show with 2 more runs scheduled.

A huge thank you to Ingo and Ingi plus all the track crew at Kvartmíluklúbburinn for your hospitality so far. All of us are having a fab time in Iceland which is an absolutely beautiful country.

The FIA Main Event had the usual mix of ups and downs with the cars.

We had spent a few weeks fixing the leak on Number 3 that had occurred at Festival of Power and whilst resting Number 3, we had  given Number 5 some more runs at Santa Pod steadily building on the time and speed.

There was no time for rest after the Main Event as Number 3 was loaded into a container yesterday ready to ship to Iceland where we have been invited to run at the 40th anniversary at the Kapelluhrauni dragstrip on Thursday 4th June. The team will fly out next week and are very much looking forward to the event.

This event has been in discussions for many months and has managed to be kept off the radar (more or less) until all details were confirmed.

Happily, we can report that testing with the jet dragster is coming along nicely. We still need to build up the speed but at the weekend, the dragster ran a 1/4 mile Personal Best ET of 5.69 seconds.

A belated event report from our Easter weekend ‘Festival of Power’ at Santa Pod Raceway.

The weekend was a mixture of pleasure and pain. Unfortunately Friday 3rd April was rained off late in the day so no racing took place.

On Saturday, we were called for our first side by side run of the day. The dragster got to the startline but the starter motor would not fire up. After a couple of attempts, we were pushed back. Frustrating to say the least!

There was no time to fix the problem as we were straight back down with Number 3. The car ran a Personal Best and the quickest ever Jet FC pass in Europe at 5.72@268mph !

I decided not to run Number 5 again that day as I didn’t have time to solve the issue.

The second run of Saturday with Number 3 saw another PB but this time over the 1/8th mile at a speed of 214mph.

Two PB’s for Saturday with Number 3 but no such success with the dragster yet.

Sunday, I had hoped all the bad luck was behind us. The first run of the day was 1/8 mile side by side Number 3 vs. Dragon Hunter. After a red light by Dragon Hunter, the car did an 3.97@206mph.

Another quick turn around and back to try again with Number 5 and side by side with Split Second. This time the starter motor worked fine but we had afterburner issues. 1/8 mile time of 5.51@145mph. At this point, the team were not in the best of moods!

Another exceptionally tight turn around and back on the line with Number 3 against Dragon Hunter. A second red light from Dragon Hunter and a 1/8 mile time of 4.06@200mph for Number 3.

The final run of the weekend for Number 5 and we got to the startline, fired up and then……… a fuel leak!!! We shut off and that concluded our frustrating weekend!

Since Easter we have tested the dragster again only to find we have a solenoid issue now! Over the next few days, the solenoids will be replaced and hopefully this will be the end of our bad luck.

Who said running jets was easy??

The first run of 2015 was on Saturday 21st March and although it had been a cold day, at least it was dry. The car performed well for its first run at 5.77@263mph with an early shut off!

Sunday of The Fast Show was another bright sunny day and our two runs were, in all honesty, not the best that we could do. The track wasn’t right for us and the start line didn’t have enough grip to hold the car. A 5 second and low 6 second run was the best we could do in the circumstances.

With the upcoming weekend off, the team are preparing for Festival of Power over the Easter weekend as we have both Number 3 and 5 completing solo and side by side runs.

2015 Season Around the Corner

With Spring in the air, the 2015 season is just around the corner. In two weeks, FireForce 3 and the team will make their first outing at The Fast Show at Santa Pod Raceway. Hopefully the weather will be kind and we can start the year off with a bang!

Then two weeks after The Fast Show, Number 3 and Number 5 (jet dragster) will be at Festival of Power, Santa Pod’s Easter weekend event.

Let’s get this year underway…..see you at the track!

Wishing you all a Happy New Year.

After a relaxing Christmas soaking up some sun, it’s back to the daily workload that seems never ending. 2015 is shaping up to be a busy season (when isn’t it?). We already have an additional event to our schedule over the May Day bank holiday when we will be travelling to France to take part in the Chambley event. 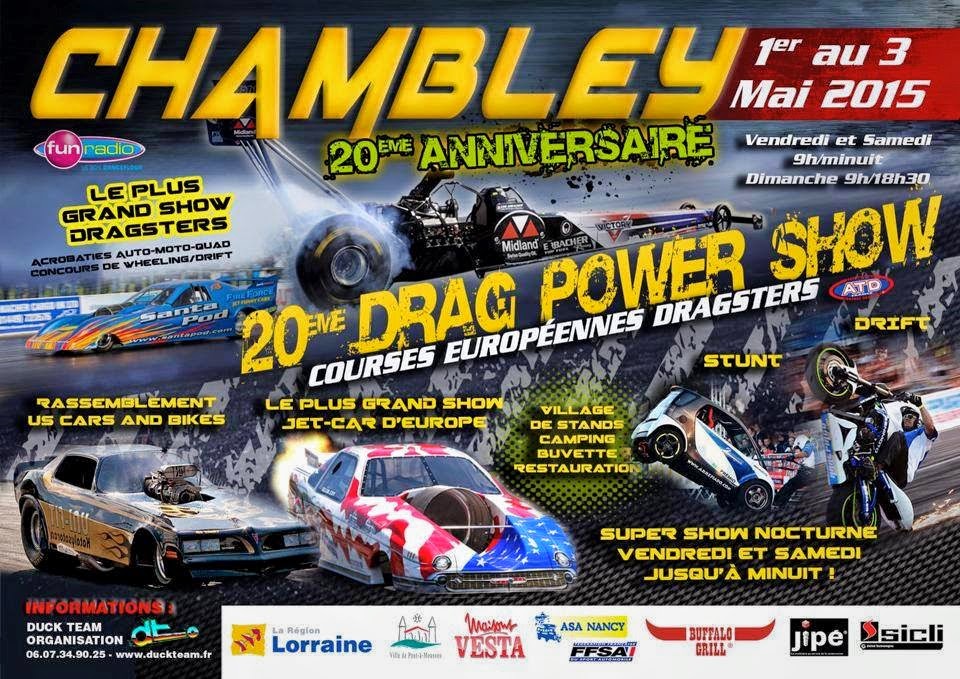 As well as the usual events at Santa Pod Raceway, there are still a few other events in the pipeline. Don’t forget to check our ‘Scheduled Events’ tab to find out where we will be!!

Our first outing of 2015, will be at The Fast Show at Santa Pod on Sun 22nd March and then Festival of Power over the Easter weekend where both Number 3 and Number 5 will be unleashed.

Roll on the Spring!!

It doesn’t seem possible that another season has come and gone so quickly!

2014 saw the unveiling of FireForce number 5 jet dragster and at Festival of Power over the Easter weekend, it did its first run down the drag strip. By the Main Event in May, the dragster took to the strip again with its completed George and the Dragon themed paintwork. Still in the testing stages, it was only at the Flame & thunder show in October that the full potential of the jet dragster was starting to become apparent. A couple of 6 second runs at 200mph+ was a happy end to the FireForce season.

2014 also saw the return of FireForce at Hockenheimring in Germany after nearly 10 years away. The Saturday night show was great fun with side by side runs against Dragon Hunter……..(we won)!

The highlight of this year must be the Personal Best ET in number 3 at the National Finals in September recording an ET of 5.75 seconds over the 1/4 mile. Not bad for an old guy!

With lots of projects in the pipeline, the winter months are set to be busy and no doubt March will come around quickly. Our first outing at Santa Pod is on Sun 22nd March at The Fast Show.

See you next year

Many thanks to everyone who has sent messages of congratulations via Facebook, email and text after our Personal Best 1/4 mile ET last Sunday.

After a turbulent weekend at the FIA European Finals (Sun 7th Sept) we had to cancel our scheduled runs due to some stress damage to one of the turbine blades. Rather than risk further damage, we decided to do a complete engine swap and fitted a spare engine. This engine was not fitted or tested in time to complete our runs at the Euro Finals but after a test fire up last week, I was confident that the spare engine was fitted and running sufficiently enough to run at the National Finals.

On Saturday 20th Sept, at the National Finals, the track and weather conditions were good and we did a 5.81 second run. Myself and the team were happy with the performance.

On Sunday 21st Sept, the track and weather conditions again were good. There was a slight tail wind and the car ran a 5.75 second ET over the quarter mile, which is a personal best.

Needless to say, the whole FireForce team are happy with this run and we are extremely grateful for all the well wishes since Sunday.

Our next outing is Sun 28th Sept at the BMW Show. See you there!

FireForce 3 Jet Funny Car and FireForce 5 Jet Dragster will be running on the dragstrip at Santa Pod’s season finale on Saturday 25th October.

Flame & Thunder is a real family friendly event with plenty of track action, monster trucks, massive bonfire and firework display. Bring the family along and watch both of the jet vehicles in action.

This will only be the second time that Number 5 has gone down the strip complete with the St George and the Dragon themed painted body.

Find out more about the event by visiting www.santapod.com