World Record Breaking FireForce 3 (No. 3) is the third Jet Funny Car in the FireForce family. It is kitted out with the Santa Pod Raceway livery after Santa Pod wanted a branded vehicle to race at the track. No 3 debuted at ‘Flame & Thunder’ at Santa Pod Raceway back in 2004 and since then has appeared at many events. It is the most photographed FireForce vehicle and continues to stop people in their tracks. With the intense heat that’s propelled from the jet engine and the roar of the car silences the crowds as the Jet Car accelerates down the strip.

This mechanical monster of a machine develops thrust in the jet engine equivalent to more than 10,000hp and can destroy the quarter-mile in 5 seconds with a terminal speed in excess of 300mph!

The world record was broken at the Easter Thunderball event 2005, with Martin Hill pushing the car to its limits and clocking a terminal speed of 336mph in 5.793 seconds! 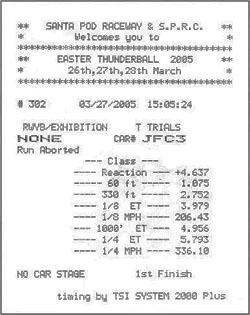 Here are some Jet Car facts